Rolling in cinnamon roll dough that is!  (The biscuit type.)

As much as I wish that it was the money-type-dough….  It’s not.  But this is the next best kind!  But!  Before we get to that…  Baking.  Who likes to do this?  Is there anyone else out there that just loves to bake?  Because I could bake sun-up to sun down if I had the people to bake for and the time to do so…  Just wanted to let you know about that.

Guess what!  Our little boy crawled for the first time yesterday!  It was a very exciting, but bittersweet moment.  Exciting because he’s crawling and growing up.  Bittersweet because he’s growing up SO fast.  I cannot believe how big he’s getting and how much he’s doing.  Have I mentioned that he claps and tries to sing along in church?  (Or that he’s a complete goof ball?)

Don’t you love the hairdo and expression?  🙂  Priceless.

Speaking of church, our church played the movie Courageous over the weekend.  It was a great movie.  I highly recommend it.  It is focusing on what God says of fathers in the Bible.  But it has great advice in it for mothers as well.  We are to bring up our children in a godly way, honouring Him through it all.  It’s a really hard task.  But completely achievable with the help of prayer and the Holy Spirit.  Joshua 25:15 – “As for me and my house, we will serve the Lord.”

On to these FAMOUS Cinnamon Rolls.  They are sooo good.  I’ve mentioned my grandmother in a few of my previous posts.  She was a real influence on my baking.  I have been baking as long as I’ve been standing (and probably before).  This recipe is one that she would let me help with right from the get-go.  It was our recipe (well, it’s hers, but it was our special time spent together making them).  😉  We are a family that tends not to measure…  I know, I know…  Tsk tsk.  BUT – things just taste better when they aren’t perfect.  (Remember my gripe about perfectly round cookies?)  I love being able to judge how much of something I need to dump in without a measuring cup.  Don’t get me wrong, I still do measure a lot of things (especially for certain recipes when it is critical that certain amounts are exact), but I dump a lot of ingredients in the bowl willy-nillly.  Anyway, my ramble does have a point – we tend not to measure… i.e. – this recipe does not really exist.  I had to make my grandmother sit down and really think about what she puts in her cinnamon rolls, so I could write it down to have and to share.  So, here goes!

Stir together the margarine, eggs, milk, vanilla, and salt.  Once it is combined, add two cups of flour and the baking powder, stir. Add 1/2 cup flour, stir.  If the dough is too sticky to handle, add the rest of the flour.  If it seems okay, then don’t add any more.  Simple as that.

After you’re done mixing, slap it on a floured surface and roll into a rectangle (the dough should be about 1/2 inch thick, or whatever you prefer really).  Next – spread with margarine.  The more, the better.  Yum.

Then, sprinkle (very generously) brown sugar over the butter.  Don’t forget to spread it out and lick your fingers (and to wash your hands afterwards…).  Then sprinkle cinnamon over the sugar, to your own taste.  If you like raisins, you can throw some of those on top – SO good.  After all that, you can roll these puppies up.  From the long end.  They should look somewhat like this when they’re rolled: 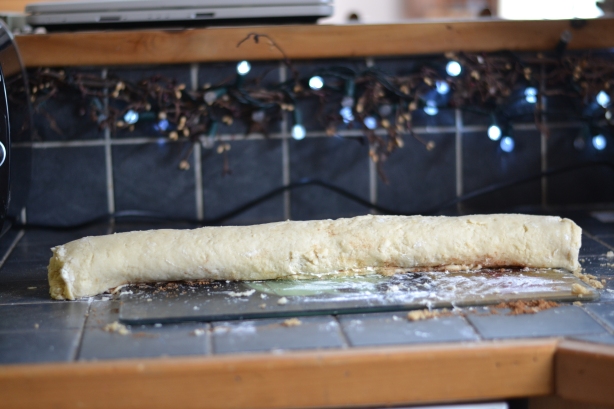 I cut them into 12 rolls normally, but you can make them thicker/thinner if you want to.  Then put them on a greased cookie sheet, or in a greased 8X8 pan (depending on how you want them to turn out).

Oh!  Remember to cut the ends off, just a little slice off of either end to make them look better (and so that you have some extra dough to sample).  Nanny would save the ends for us every time she made them.  (And if I got through the door first, I’d quickly scarf down both ends so I didn’t have to share with my brother… Very sisterly of me eh?) 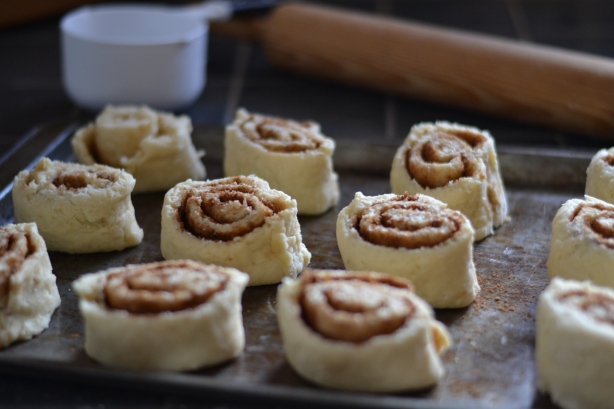 Bake at 350 for about 20 minutes, or until dough is set and slightly brown.

They looked so good.  I just couldn’t stop taking pictures of them.  Last one, I promise.  Best one too.

Wow.  One of my most favourite foods (I think I have a lot of those….)

And just a side note – Congratulations to my best friend Ivy, who just got engaged this weekend!

What is your favourite baked good?  Have any family traditions around baking?

My name is Kayleigh, and I'm all about faith and food. Sit down with a cup pf coffee, relax, read this blog, plan your baking for the day, and let me share my faith with you.