I had a great weekend.  I know this post is late in coming, but I have been feeling slightly exhausted…  So that’s my excuse.  There you have it folks, Kayleigh is exhausted.  But getting better.  🙂

Back to my weekend.  My parents went away for the night on Friday, so I was going to keep my youngest brother for the night.  I had the [brilliant!] idea of inviting his best friend over, and her little sister ended up joining us too.  So I actually had some female company for once, and we weren’t outnumbered, which was really weird, but great.

This is our story.  Friday night, we had s’mores on my new fire pit thing (that my wonderful parents-in-law bought me for my birthday) – the kids loved it.  And I LOVED watching them have fun.  They snuggled up on the driveway with blankets and roasted marshmallows and stuffed their faces.

Then we came inside and they snuggled in to watch ‘The Quest for Camelot’ (my most favourite movie ever). 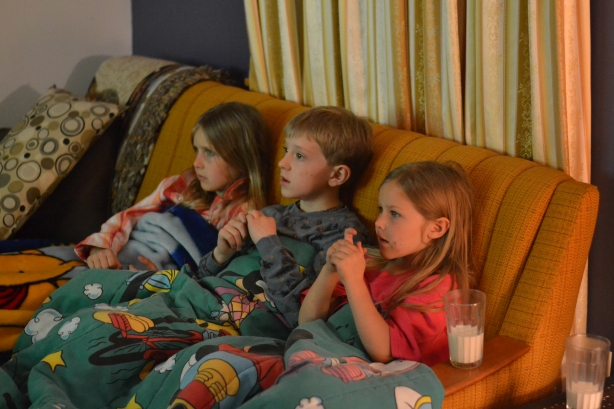 Then came bedtime (midnight).  (One of my other brothers decided to crash here that night too (he was in for it… keep reading, haha)).  One slept on a couch, two on the floor, and my brother took the other couch.  I didn’t hear them at all until 7 the next morning (I got to sleep in!!).  However, my brother wasn’t quite so lucky.  Apparently, they had been awake since 5:30.

Anyhow, I got them settled into another movie (Robin Hood) and they enjoyed some ‘baby tea’** while I started cleaning up and getting ready for breakfast.   After the movie, breakfast still wasn’t ready, so they took some chalk to the driveway and coloured it up.

Breakfast menu – Homemade waffles with strawberries and whipped cream, smoothies and perked coffee (for those old enough to have it).  Breakfast went great.

I thought it was pretty cute.  After breakfast, we went for a walk, and then made cards for my Dad for his birthday.  Then their mom came and picked them up, and I had to get started on my dad’s birthday supper and cake!  Whew.  What a day.

So – my father had a birthday and I want to share his cake with you! 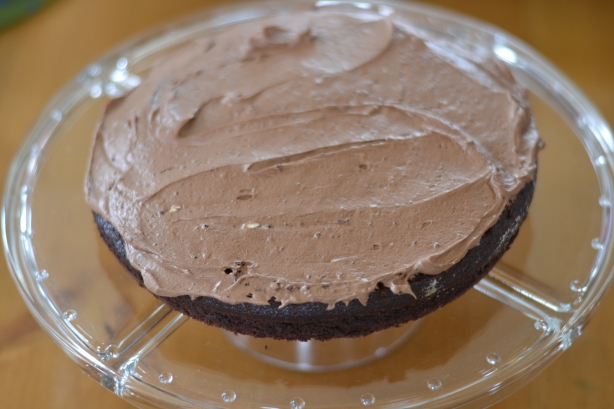 He requested a Hershey recipe that he loves to make (and eat too, apparently!).

The link to the recipe is here.  I’ll type it out for you too though.  I did make a few changes to the buttercream icing, so I’ll give you my version of that.  🙂  Hope you enjoy!  The icing is amazing – just to warn you.

Oh oh oh!  And I used my Kitchen Aid Mixer for the first time ever!  It was really awesome.  I can’t wait to use it again.  I know, I know, you’re probably asking yourselves why I haven’t used it before.  Well, I am slightly old school, and a tad lazy.  Old school:  I tend to use a wooden spoon or a hand mixer for a lot of things (but I just couldn’t for cake, it needed a REAL tool).  And lazy:  I just didn’t want to drag the mixer over to my counter (it won’t reach the plug in my under-sized kitchen) and then have to clean all the parts…  *sigh.  But it was totally worth it.

I’ll give you my directions, as I make things differently than most recipes tell you to…  I just can’t follow directions!

Pour into two 9×9 cake pans that have been greased and floured.  Bake for 30-35 minutes, or until cake tester inserted in the middle comes out clean.  Let them cool for about 10 minutes, and then take them out of the pans and cool them on wire racks.  Frost with One Bowl Chocolate Buttercream Icing. 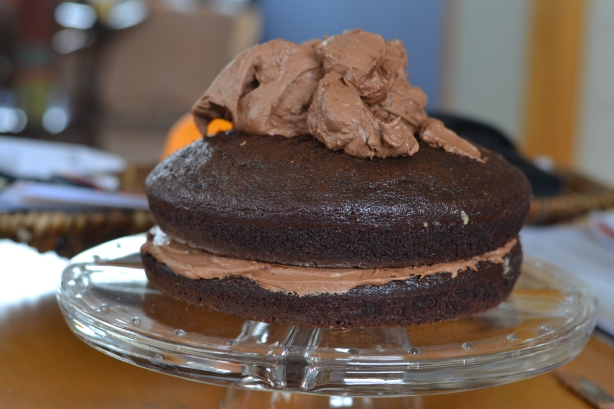 3/4 cup cocoa
1/3 cup milk
1 tsp vanilla
Beat butter until smooth.  Add the rest of the ingredients, and beat until smooth.  If it’s too runny, add more icing sugar, and if it’s too thick, add some more milk!  Easy as that.  Now frost that cake.

It’s sooo good.  I hope you really like it.  And I’d use the icing on just about any recipe that you need chocolate icing for – it’s super good.
Happy birthday Daddyo!

What kind of cake is your absolute fave?

When I think of velvet, I think of really uncomfortable dresses.  I’m not sure why, something from my youth triggers it, but I just can’t remember what exactly.  Anyhow.  When I put that velvet picture in my head and add the words ‘red’ and ‘cake’…..  Well, it just doesn’t seem quite right.  Downright awful actually.  But, I was wrong.  There.  I’ll admit it [for once].  I.  Was.  Wrong. 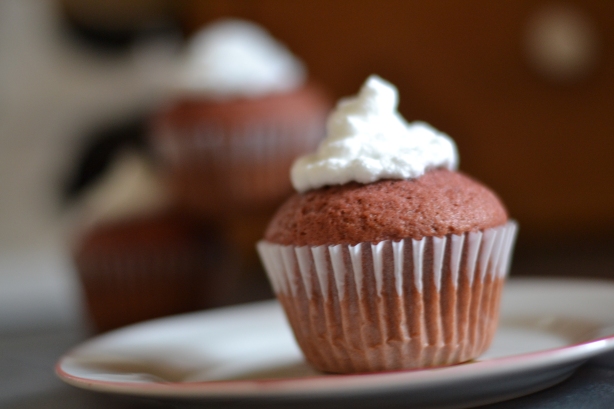 A friend asked me the other day what was so big about ‘Red Velvet Cake’.  I responded that I wasn’t sure, but I didn’t think it was anything too crazy.  So, I proceeded to look them up (I had before, but hadn’t looked at it too hard…).  Anyway, it wasn’t anything too crazy, so I thought I’d give it a try.  I found a recipe on Bakerella, but I tweaked it a tad, and made it into cupcakes instead of just a regular cake.

Preheat oven to 350.  Pour milk and vinegar into a measuring cup, set aside for 10 minutes.  Line cupcake pans with liners.

Whisk eggs lightly.  Add remaining liquids and whisk until blended.  Stir in cocoa and sugar.  Add flour, salt, and baking soda.  Mix until smooth.  Pour into cupcake pans.  Bake for 20 minutes (or until tester inserted in middle comes out clean). 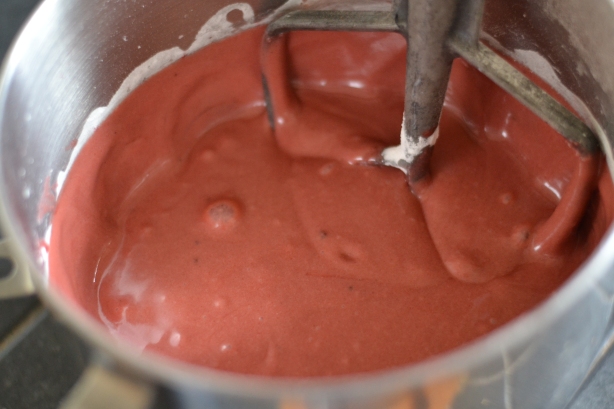 Anyhow.  It was kind of a busy day making these.  I had two younger brothers to feed, and a baby who just loves attention.  But!  I prevailed, and they turned out pretty good I must say.

After I had delivered my cupcakes to my friend (who had mentioned them to me), I got home to less cupcakes than were there when I left.  Turns out they were too good to just look at.  An additional brother landed home while we were gone and just couldn’t help himself. 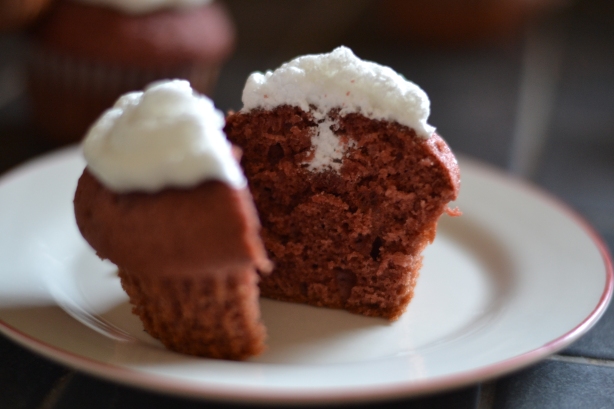 {I attempted to fill the cupcakes with the boiled icing… didn’t work too well (it’s just not the right consistency – too fluffy), but it kinda worked…}

A piece of interesting factual information for you about red velvet cakes – they are called red velvet because of their colour.  (Duh, right?)  The cake turns red because of a chemical reaction between the cocoa and the buttermilk (or vinegar).  It also turns red because of added RED food colouring.  Apparently, most cocoa used to be lighter than it is now, and it turned cakes more red, but cocoa is darker now, and while it still turns slightly brown-ish red, colouring is needed for the full effect.  You can still buy the lighter cocoa though. 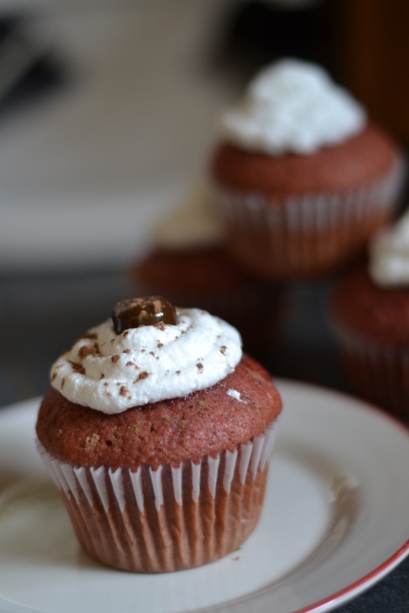 {Just for extra prettiness, I put an espresso candy on top with a sprinkling of cocoa.}

I also did something different for icing.  Seven minute icing.  It’s a type of boiled icing.  And it’s pretty good.  But I’d never made one like this before.  One reason I really like it, was because you don’t need to use a double boiler (which you normally do).  But, it’s not quite the same.  (Not as good as my mother-in-laws, that’s for sure!)

In a saucepan, combine sugar, water and cream of tartar.  DO NOT stir.  At all.  Okay?  Bring to a boil, and boil for about 10 minutes.  While you’re waiting for that, put the egg whites and salt in a mixer, and whisk until whites are peaking.  Pour sugar water over egg whites and beat the frosting for 7 minutes (hence the name of the icing…).  Add vanilla extract.  The icing will be really nice and fluffy.  And it will taste sooo good.

I had a LOT of icing left over from the cupcakes…  And my hubby just so happens to LOVE (that’s right folks.. another baked good he’ll actually eat) chocolate cake with boiled icing.  So.  After my cupcakes were made, iced, and delivered.  .  .  .  .  .  (it took awhile)  .  .  .  .  …….  I set out to making a chocolate cake.  (Needless to say, I didn’t get a whole lot else accomplished this day!)  I made this chocolate cake recipe and slopped ALL the rest of the icing on it.  It was pretty delicious. 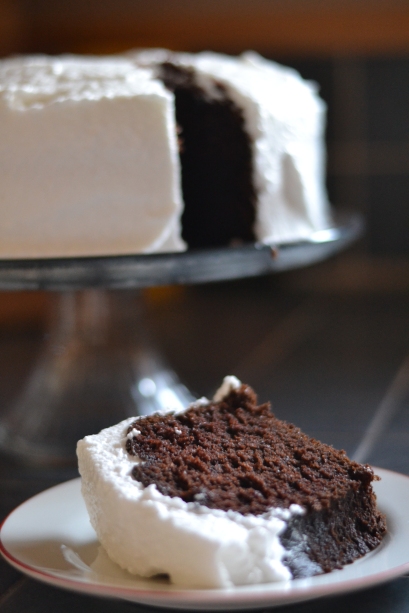 Notice I [attempted] to pipe the icing onto the cupcakes…  it didn’t work so amazingly well.  Boiled icing isn’t quite the right consistency… but it worked.  Just thought I’d give a warning there.  You WILL make a mess if you attempt to do that.  I would suggest using a flat spatula, and smoothing it on instead (as I did on my cake).

Anyhow.  There was my greatest adventure for the week.  (Notice I said week, not weekend.  I had quite the spree on the weekend, but we’ll talk about that later, when it’s not so fresh on my mind.)

Ever tried a red velvet cake before?

My name is Kayleigh, and I'm all about faith and food. Sit down with a cup pf coffee, relax, read this blog, plan your baking for the day, and let me share my faith with you.